A downloadable Senpai WataMite for Windows, macOS, and Linux

SYNOPSIS
It's Valentines's day, the most dreaded day of all, but as a typical shoujo heroine type character you are definitely prepared for its' outcome - however the heck it may turn out to be.
Armed with a box of homemade chocolates full of your love, you embark on a one-day quest to hunt down senpai and GIVE IT TO HIM STRAIGHT.
It won't be like all those previous failed years at all, you hope. This chocolate isn't going on a turnaround route to your best friend (who hopes otherwise)!
A parody otome game with five endings and a fair amount of extra content!

PROJECT INFO
Hello, all~ Krissy of Silverspork Productions here!
A little background on "せんぱい ~私を見てください~" (lit. "Senpai ~Please Look At Me~").
It was initially tossed together as a project for a Nihongo class project a couple years ago (even we find it hard to believe it's been that long).
Just recently, we picked it up again decided to fix up for others to try out.
Our class and a few alpha-testers gave positive feedback about the game, so we hope you'll all enjoy it as well!

Some of the scenarios are written to poke fun at a few common otome game details,
though we might have gotten carried away and put more focus on romance than on making it a parody, but there's enough humor to go around!

It's been up on our Tumblr page, as well as on the LSF for a little over a month, and even if it's no longer the valentine's season, we do hope we can still spread the love around a bit over here as well ;)

i could download it but i couldnt play it and it all these other things in that i could only click. im disappointed. if you know how to fix this, reply back to me, thanks! ^w^

Man, writing a comment on this without spoiling anyone who sees it is gonna be tough.

I did really enjoy the concept and execution! Poor [redacted], I'm glad he took the revelations and stuff more levelheadedly than [redAAA] or [reDDD], he's becoming my favourite example of characters who [---------]. The drawings are done in a very soothing style, too. It was nice looking at the extra cgs and seeing how they had developed over the years.

But you mention in the comments below that you're planning on polishing the game at some point? In which case, I have two suggestions. Maybe, after [------} starts happening, it would be better to simply revert to the title screen, at least some of the time? Repeatedly being exited out of the game over the course of the 45 minutes it took to play took the sting away fairly quickly.

The second suggestion is related to the music. I didn't see any music credits in the... well, credits section, so I hope none of the team takes this personally, but... It was honestly kind of hard getting into the game due to the low music quality. Perhaps you should look into copyright-free music for the remake, or maybe even ask friends/colleagues for help? Having bubbly but wellmade music might help the mood whiplashes get across stronger, imo.

But overall, I did enjoy this and look forward to hearing more about the updated version! Maybe I'll convince some friends to play it or at least show it to them, who knows~

MY GAME SHUT DOWN RIGHT AFTER I GOT THE BAD ENDING IM??? is there something that happens??? im curious heLP

EDIT.: Okay so, is this a bug?? i got all the endings, and then she went to check on the classroom, right after she says something the game just shut down??

Like waywren, I got to this game thanks to TVTropes. I was looking up the page for Doki Doki Literature Club, and when they mentioned this game the name was so catchy I just had to try it.

And oh boy, am I glad I did! This was an amazing experience. And since I'm an idiot, I actually did not notice the walkthrough on the forum page, so I ended up brute forcing my way to the senpai endings :P I stopped myself from reading the spoilers until I got at least all the five endings, but then I went "What if...?" and found out most of the other stuff myself. Except the "depressing" stuff. I just didn't have the heart to try and do anything that might have made everyone sad, so that's still a mystery to me.

(By the way, considering the background of this game, "Kanji" was the only name I deemed appropriate. I may also have been thinking about Persona 4 at the time, but I can neither confirm nor deny that sentence.)

As I said, awesome, awesome game! Thanks for making it and for all the effort you put into it.

omg this is beautiful. While TVTropes had spoilt me a little bit on certain things, the journey was more than worth it, and this was all so very cleverly done. Putting together all the clues and realising what was different was AMAZING, and then as things went on... wow. Just wow. You mock 'cos you love and made me love it too--mind you, my only other dating sim experience is Hatoful Boyfriend, and I loved that, so I'm weird XD

...also I may have been cheering about harems and ot4s. XD

First of all, I must admit that Ryn and I got a little excited over finding out there was a mention of our game up on TVTropes, and there was a bit of a shuffled to figure out where seems to have made me forget to reply a long while back;;;

But thank you very much for your feedback and for your love for the game! The spoiler has been marked out, though I'm glad prior knowledge somehow added to the experience *^* Hatoful Boyfriend is a great first dating sim experience by my book, and it honestly is one of my main inspirations, even with Senpai WataMite! hehe plus there isn't anything wrong with being weird~ :3c

Thank you for your support!! <3

I really liked this. I played through a few times but keep getting one of 2 endings--I can't seem to get the others. I either get the "bittersweet" or "It's all cool!" I'll keep trying XD;

I did want to mention that I saw a few small errors in my play through. When James is quizzing MC about senpai, he says, "This once (one) is going to be a little tough." And also in the bittersweet ending, it says, "Not everything goes you (your) way."

Just thought I'd let you know ^u^

Ah, thank you so much for the input!

I'm actually working on an updated version with better graphics, bug fixes, and typo fixes so this is a big help :D Plus, feedback is always loved! You're really livening up the dead space in the comments area and I'm very, very thankful for that as well.

As for the endings- I actually have a walkthrough up over here but it seems like I totally forgot to link this page over to it. Oops. I'll get to fixing that as well. (And just in case you want to get through without direct advice, don't worry, there are also hints there to help you figure out the other endings yourself! Self-discovery has lead to most of the feedback for this game elsewhere :3c )

Anyway, thank you again for your comment, interest, and love for this game <3 I hope senpai notices you soon! ^^ 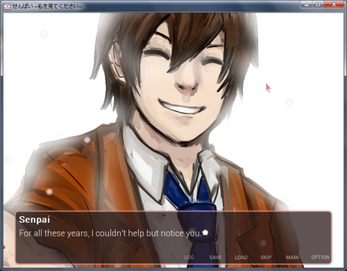 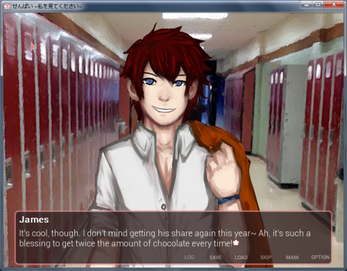